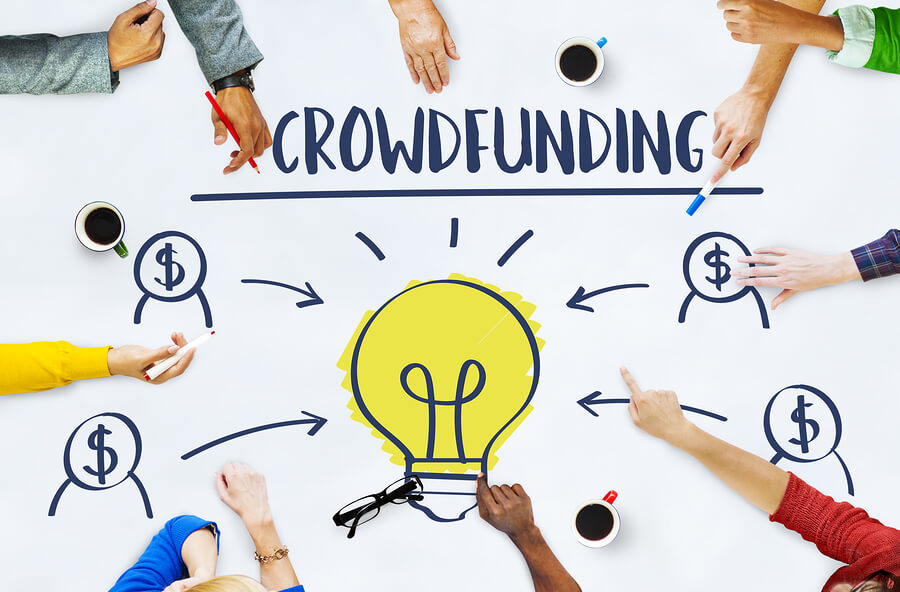 If you’re an entrepreneur with a new business idea, landing investors and launching your business can pose a paradoxical “chicken and egg” scenario: You need one to get the other, so how do you get started without either? Many companies use crowdfunding campaigns to bring novel concepts to market, raising small amounts of capital from a vast number of individuals online.

Take virtual reality company Oculus VR as an example, which started with crowdfunding and was later purchased by Facebook for $2 billion.

Mark Campbell, who is an advisor with The Oracles, has seen hundreds of entrepreneurs and inventors attain anywhere from $50,000 to more than $1 million for their business ideas this way. As vice president of marketing for crowdfunding launch program InventureX, Campbell has greenlit projects ranging from electric bicycles to science experiments.

“Crowdfunding is a great way to test a novel idea, prove a concept, and win investors,” he said.

So, how do you take a new business idea, achieve massive exposure and exceed your financing goals? From the mind of a crowdfunding connoisseur, here are five steps to manifesting your million-dollar idea and transforming it into a profitable business.

1. Determine if crowdfunding makes sense for you

“First, figure out if crowdfunding is even right for your idea,” Campbell said. “An idea can be crowdfunded if it provides value to a specific community and if you can offer an incentive or reward to that audience online. It has to check both boxes.”

From mobile apps to web platforms and gadgets, you may be surprised by how many ideas can be crowdfunded. A group of scientists recently came to InventureX to test the question, “Are we living in a virtual reality?” Through crowdfunding, they discovered a massive community interested in their question, and the project raised more than $230,000. They’re now using the funds to test the “Simulation Theory,” which would prove their hypothesis and are making a documentary about it.

To maximize returns for your campaign, envision what a successful one looks like from the onset. While getting funding is important, don’t stop there. You can accomplish more than just financial goals with crowdfunding, so don’t limit yourself.

“Identify a few objectives in addition to raising funds,” Campbell said. “It may be exposure or proving the concept before you invest your whole life savings into it. For example, we’re seeing lots of foreign companies use crowdfunding to test their product through a soft launch before entering the U.S. market. By releasing their product to a sample audience, they can test and improve it before launching it full-scale.”

Related: Should You Start Your Business with a Partner?

3. Provide value to your supporters

Every successful campaign hinges on audience participation. Once you identify your target audience, decide what will incentivize them to invest in you. According to Campbell, there are two kinds of incentives:

“There’s the traditional rewards-based model, and there’s equity crowdfunding, which is like a mini IPO — you’re offering ownership.”

Campbell recommends structuring your rewards so you maintain ownership of your idea. As a fellow entrepreneur, he doesn’t like to see people give away ownership out of desperation.

“Instead, get creative with incentives — you’ll be surprised by what motivates people to get involved,” he said.

The reward could be the product itself, exclusive early access to an app or acknowledgment. For example, if you’re crowdfunding a documentary film, a “special thanks” credit can win pledges.

The next step is to decide which platform is best for hosting your project. Hosting sites like Indiegogo, Kickstarter and GoFundMe each have their own policies.

“Carefully review the rules of each site,” warns Campbell. “On sites like Kickstarter, you keep 100 percent ownership of your work, but you won’t see a penny if you don’t meet your goal by deadline — even if you’re 80 percent funded.”

It’s key to weigh the benefits and drawbacks of each platform.

With crowdfunding, you reach myriad investors from one site: your project page. As your sole point of contact with potential investors, it has to be high caliber. According to Campbell, the most critical element is the promotional video: “A great video clearly and succinctly tells your story, presents your value and emotionally connects with the audience.” The ideal video should be no longer than three minutes.

Campbell recommends knowing your strengths and asking yourself, “Can I confidently design a project page, add eye-catching graphics, create a powerful video, and tell a story that will convince people to open their wallets and support me?”

If not, hire someone or recruit skilled friends to your cause.

The more exposure for your campaign, the better.

“Lock in a marketing plan before you launch, be it promoting your product to specific online communities or advertising to drive traffic to your page,” Campbell said, noting that effective marketing plans typically include Facebook advertising, PR outreach to media, social media promotions and influencer marketing.

Campbell recommends finding a marketing partner who’s as invested in your success as you are. Look for people who are highly regarded in crowdfunding marketing and demonstrate their expertise every day. “You want a partner who specifically knows crowdfunding and how to position your project so people share it.”

Once you’re off the ground, use the momentum to build your business. Campbell recommends thinking big about your brand and how to scale it: “Some next-level strategies are creating an e-commerce store, securing more financing and getting into big-box stores.”

“We’re on the cutting edge of entrepreneurship. I never know what big idea is going to walk through the door next.”

Who knows? Perhaps it will be yours.