The American Dream: From Rags to Riches, the Story of Chris Gardner Jr

Home The American Dream: From Rags to Riches, the Story of Chris Gardner Jr 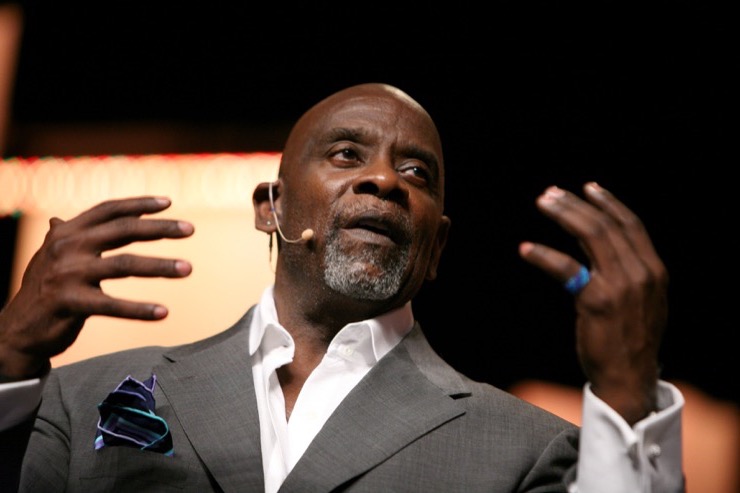 The American Dream is something that every United States citizen should have the equal opportunity to achieve success and prosperity through hard work, determination, and initiative. For centuries, this ideal has pushed Americans through hard times in hopes that they can work their way out of poverty to a “better” life.

Today, the American Dream may seem like a memory of the past, but the following incredible story of one man’s journey from rags to riches proves that anyone can change their life — but it doesn’t come easy.

Christopher Gardner was born in Milwaukee, Wisconsin on February 9, 1954, to parents Thomas Turner and Bettye Jean Gardner. Chris was the second child and only boy of Bettye Jean, who also had a daughter, Ophelia, from a previous marriage. His mom later married a man named Freddie Triplett and they gave him two more half-sisters, Sharon and Kimberly.

Unfortunately, despite having two fathers, Chris didn’t have many positive male role models growing up. His father was living in Louisiana during his birth and his stepfather physically abused his mother and his sisters. Chris and his sisters were constantly afraid of Triplett due to his fits of rage. Their mother was even falsely imprisoned once when her husband reported her for welfare fraud and the innocent children were placed in foster care.

When Chris was eight, he and his sisters returned to foster care after their mother was convicted of trying to kill Triplett when she tried to burn down their family house while he was inside, in a fit of desperation. During this time, Chris grew close with his three maternal uncles: Archibald, Willie, and Henry. The three men, Henry in, particular, entered Chris’ life when he needed a positive father figure most. Sadly, tragedy struck again when Henry drowned in the Mississippi River just one year later. At his funeral, the children learned their mother had been in prison when she showed up with a prison escort.

Yet despite her troubled life, Chris didn’t consider Bettye Jean a bad mother and gave her children strength and inspiration. Bettye Jean always encouraged Chris to be self-reliant and confident, telling him, “You can only depend on yourself. The cavalry ain’t coming.” Due to his difficult upbringing, Chris was also determined to avoid a life of alcoholism, domestic abuse, child abuse, illiteracy and fear.

Chris was forced to endure many traumatic events throughout his childhood, but sexual assault was by far the worst abuse. A grown man whom he trusted raped Chris when he was a young boy, damaging him for many years to come. Another horrific moment that affected Chris Gardner was a Christmas Day altercation in which Triplett drunkenly threatened him with a shotgun.

When Chris was finally old enough to move out on his own, he remembered his Uncle Henry’s stories of adventure in the U.S. Navy and decided to enlist, hoping to avoid the fate of so many other young men with no college education and a poor background. Chris was first stationed at Camp Lejeune in North Carolina and spent the next four years of service as a medical corpsman. It was during this time, he met Dr. Robert Ellis, a young, decorated cardiac surgeon who would change his life forever.

Dr. Ellis took a chance on Chris following his discharge and offered him a position assisting him with innovative clinical research at the University of California Medical Center and Veterans Administration Hospital in San Francisco in 1974. Over the next two years, Chris learned how to manage the laboratory and perform various surgical techniques. Although Ellis’ research project was underfunded and Chris was paid just $13,000 a year, he gained invaluable knowledge and became an expert in the specialized field of open heart surgery.

Just a few years later, Chris’ life turned a different course. He married Sherry Dryson, a wealthy Virginia education expert, after many years of a long-distance relationship. Around this time, Chris realized by the time he finished a decade of med school, the field would be very different and decided to abandon his dreams of being a doctor when he turned 26. Sherry and Chris became detached due to his career change and the two also struggled with their very different backgrounds and upbringings.

The couple’s lack of communication and intimacy took a great toll on their marriage and things only got worse when they decided to try and have a child. They eventually became pregnant, but Sherry suffered a miscarriage early on, creating an even bigger distance with her husband. Soon after, Chris started to look for something outside his unhappy home.

Chris soon began an affair with Jackie Medina, a young dental student who lived down the block. After just a few months, Jackie became pregnant and Chris left Sherry after three years of marriage to move in with Jackie and give his child the father he never had. On January 28, 1991, Christopher Jarrett Gardner Jr. was born while Gardner worked as a research lab assistant at UCSF and Veterans’ Hospital. Unfortunately, his measly salaries couldn’t support his girlfriend and their son, so he quit after four years and decided to try something different.

Chris took a more lucrative job, doubling his salary as a medical salesman, but unfortunately, trouble was just around the corner. Even though Chris vowed to never get into drugs and alcohol, Jackie convinced him to do cocaine with her and the two would hole up in their apartment for days on end. Chris first started using drugs to please Jackie during their sex-fueled affair, but he could have never imagined the dark path that would follow.

Chris got hooked on PCP and the detrimental drug made him lose his mind. He would talk to himself and believed he could fly. Chris also started using marijuana to help with the stress of his intense life and it led to him selling drugs. Although it was a short-lived side job, when his suppliers came to collect money that he didn’t have, he found himself in more trouble. He was struggling to pay rent and care for his newborn son.

Chris knew he had to dig in with his medical sales career, but unfortunately, it wasn’t enough to make ends meet. Eventually, they were evicted from their home and Chris was completely desperate. While he was down and out, Chris saw a well-dressed, successful-looking man exiting a red Ferrari and decided to ask him: “What do you do?” and “How do you do it?”. His answer would change Chris’ life once again.

Related: How This Entrepreneur Created the Ultimate Job Search Site

The man was Bob Bridges, a successful San Francisco stockbroker who agreed to meet with Chris and introduce him to the world of finance. From there, his future was decided: he would never be broke again. Chris dedicated the next few months of his life to learning how to be a broker, but while he was away, his car amassed thousands of dollars in parking tickets which he couldn’t afford to pay off. Chris spent 10 days in jail and by the time he returned home, Jackie had taken Chris Jr. and moved east, leaving Chris with nothing.

Luckily, Bob Bridges helped Chris secure an important interview at Dean Witter, one of the biggest firms in the nation owed by Dean Witter Reynolds. He was completely underdressed for the interview and was honest about his struggles. Chris landed a spot in their training program, but it would barely pay anything. During this time, Chris had no idea where Jackie and their son were, but just four months into the program she would show up and leave the two-year-old with his struggling father.

A judge soon granted Chris sole custody of his son but there was one huge problem. Chris’ building didn’t allow children and he didn’t have the money to move anywhere else. He had secured a great job but he and his son were forced to move to the street. Chris hid his homelessness from his employer and worked to find a place for his son to sleep, like in subways and train station bathrooms.

Eventually, Reverend Cecil Williams of the Glide Memorial Church noticed the Gardners standing in line at the shelter and made an exception for them to join the homeless center reserved for mothers and children only. Chris remembered the reverend’s kindness and would work hard to pay him back someday. Despite his circumstances outside of work, Chris worked hard to make his way up the ladder. He made about 200 calls a day, arrived early and stayed late. It all paid off when he passed his Series 7 Exam.

The single father eventually became a full-time employee at Dean Witter after his long struggle with poverty. Chris was able to save up for his son to go to “Happyness” daycare. It was a cheap, illegal, and unregulated child care center, but it allowed him to work full time. Chris credited his success as a father and stockbroker to the help from Happyness and eventually named his 2006 memoir “The Pursuit of Happyness”.

Although Chris struggled with homelessness, he was able to hide it from his little boy, who said he was “a good poppa”. Christopher Gardner Jr. later recalls “I couldn’t tell you that we were homeless, I just knew that we were always having to go. So, if anything, I remember us just moving, always moving.”By the time Chris was 34, he worked his way from poverty to making his first million dollars. Chris bought two Ferraris, a red one, like his mentor Bob Bridges owned, and a black one…that he bought from Michael Jordan.

In 1987, Chris started his own firm and eventually became so wealthy he was able to bankroll a $50 million project for Reverend Cecil Williams and the Glide Memorial Church. The initiative created affordable housing for poor families like Gardner’s and gave them employment opportunities they otherwise wouldn’t receive. Nearly 20 years after Chris Gardner’s one-year struggle with homelessness Will Smith and his son Jaden Smith starred in the blockbuster film “The Pursuit of Happyness” based on Chris’ biography. Smith was nominated for an Academy Award. After growing up in an abusive household, Gardner can now say he is an entrepreneur, investor, motivational speaker, author, and stockbroker worth over $60 million dollars. His incredible true story that the “American Dream” is no matter where you come from.